How do I avoid conflicted copies while working across multiple devices?Scriptation is designed to work on files between your iPad, iPhone, and MacBook/Desktop, but if you are working in the same file on more than one device at a time, sometimes "conflicted" copies arise.

A "conflicted" version is created when two devices make changes to a file simultaneously. When the file uploads back to the cloud service, the two copies will not match, and both versions are saved separately. Here's how to avoid.It's always a best practice to make changes on one device at a time, and to make sure that the file has synced to your other devices before beginning to annotate on another device.Make sure that you're running the latest version of Scriptation, as we regularly update our connections to cloud providers.While Scriptation has an automatic sync process in place, if you ever wanted to "force" a cloud sync, open a second document and change tabs.If changes were made to your file from another device, you would receive the following message. 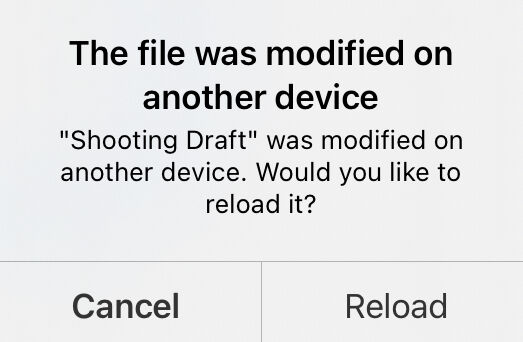 Tapping Reload would delete any unsaved changes, and sync your device to the version in the cloud.Tapping Cancel would keep the locally stored file, and your cloud file would no longer be in sync. A "conflicted copy" would soon appear, as an additional version of your file.TIP: We highly recommend using Dropbox, Google Drive, or OneDrive for syncing files across multiple active devices. iCloud is not recommended.What's NextMany people on my show use Scriptation. Should we get Scriptation Team?How do I export my entire script?How often do files upload / sync to cloud?